Bring up the lights, set the mics, and open the doors for the return of the
Vincennes University Alumni Association Community Series!

All tickets are transferrable, but not refundable.

Please Consider Becoming a Sponsor or Joining Friends of the Arts! 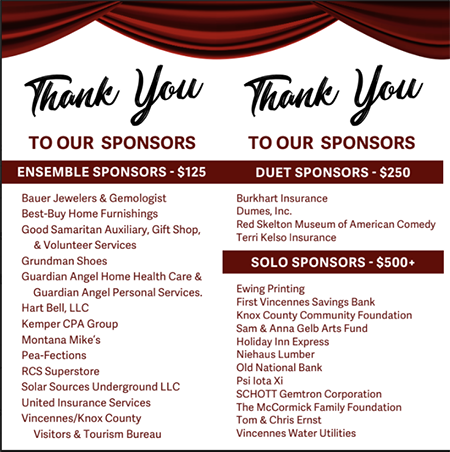 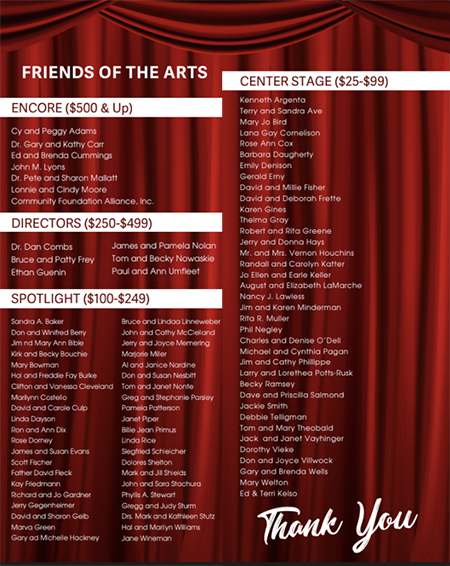 History of the Alumni Community Series

From the 1982 book, Vincennes University in Transition, The Making of a Comprehensive Community College, by author Dr. Chelsea Lawlis: At the Feb. 17, 1952 meeting of the Vincennes University Board of Trustees, it was announced that the VU Alumni Association Executive Committee was planning for the 1952-53 school year a Marching Band Festival, a Homecoming celebration, two musical programs, and a “Spiritual Emphasis” observance. The two musical programs for the 1952-53 school year were the Indiana University Philharmonic Orchestra and the Purdue Glee Club. The public was invited to all these events. The Marching Band Festival became an annual fall event and lasted for many years, featuring the IU Marching Hundred and later the Southern Illinois University Band. The festival of October 13, 1959, involved 20 bands and 1,200 band members. The evening programs came to be called the VU Community Series, a name suggested by J.H. Hill, assistant to VU President Isaac K. Beckes. Throughout its distinguished history, the Series was always sponsored by the VU Alumni Association, and later adopted the name VU Alumni Community Series.